Donate for Change in Mbarara District

I wanted you to know that on November 26th 2010 I was officially nominated by a Returning Officer of the Ugandan Electoral Commission thereby becoming FDC’s candidate for the position of Woman MP, Mbarara District. Thanks to the generosity of supporters like you, I raised enough funds for a successful nomination event. This campaign is not about what has gone wrong with our politics, economy and social services. There is enough evidence all around us of what is wrong. It is about giving the electorate a vision of where we ought to be and making sure that together we achieve that vision in our lifetime.

Ugandans who have been denied access to economic opportunity and basic social services are the audience and owners of this campaign. I know that we can work together towards realizing our goal of an equitable and just society and I need your support in order to take this message to the voters.

The successful launch of my campaign last week, has set new expectations for the quality of my campaign. We will use mobile technology, photography and the Internet in new ways to mobilize people for change. We shall also continue to use traditional campaigning tools like flyers, posters, t-shirts, caps, radio messages and above all door-to-door canvassing for votes .

I need your help to make a real difference. My campaign urgently needs funds to perform these activities. You can contribute in cash or in kind. I have opened an MTN Money Account number 0788244517 where you can send money for the campaign. Or contact me directly on phone numbers: 0791 77 00 55 or 0704891638 or email anne@fdcuganda.org If you are abroad you can transmit funds via Moneygram or Western Union to Mbarara. Otherwise you may transfer funds to my bank account, which I will provide upon request or make a payment with your debit or credit card via my Paypal account here:

I also welcome volunteers that may want to work with my campaign.

Together we can make a positive change. 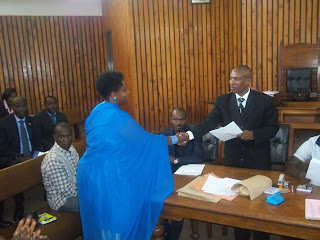 
There is a myth that everyone from Mbarara District, the land of milk and honey, is wealthy. It is simply not true. You will encounter poverty in Mbarara, perhaps not at the same frequency that you may find it in Northern Uganda, but the burdens of poverty are the same everywhere: Disease, illiteracy, workload, hopelessness and despair. Women carry their share of this burden and in many cases it is the bigger part.

The human stories of poverty are often lost in the indifference of statistics so I talk to people in order to bring indifferent data to life. Last week I met a young woman, we shall call her Rose, from Kyarwabuganda in Kashari. She seemed too young to be a mother but the baby she was holding was her fourth. Rose told me she was just a housewife, which I immediately understood to mean that she wakes up in the wee hours to light a fire and cook breakfast before going out to till the fields, collect firewood, do the laundry, tend to the children, cook again and clean the house before her hungry husband returned from work.

I probed her gently to learn her story and that is how I came to learn about her Nigina group. The group, one of many in the neighborhood, has 30 women participants who contribute 10,000/= each weekly and gift it to one of their members on a rotational basis. The women work hard to make sure they contribute so that when their turn comes round they walk away with 300,000/= shillings to do with as they please.

I loved this self help story and wanted it to have a happy ending. I asked her what the women did with all that money after months of waiting and she told me that most of them pay school fees and hospital bills. The women with spouses have found that Nigina makes their men abandon household bills because they know their wives will soon ‘harvest’ from the group. Some greedy men even demand a share of the money to spend in bars. That was not the ending I had hoped for.

After I empathized with her disgruntlement she continued without prodding to tell me another story. Rose’s father died when she was only a child and her mother sent her to live with a cousin, a headmistress of Rutooma Integrated Primary School; so that the little girl might get an education. She was only nine years old. Her cousin, a single mother with only one child, treated her badly. When she was not in class, Rose was tending to her cousin’s household chores even during break and lunch time on school days. One of her chores was to boil the fresh milk that came in daily. The poor girl lived in fear. She sat on the floor at mealtime while her cousin and benefactor shared the table with only her biological child.
One day Rose’s attention was distracted and some milk spilt as it started to boil. Fearing the punishment she would get, she tried to fill the milk pan by adding some water. The headmistress caught her and without uttering a word, she poured the boiling milk down Rose’s bent back.

The next day Rose went to school with her school uniform stuck to her peeled skin. Her teachers saw the blood and she told them what had happened but none would confront the headmistress. It took nearly one and a half months for her wounds to heal. When the term ended she returned to her mother and refused to go back to school until they found another benefactor at Kateebe Primary School.

Rose studied up to senior two and then got married. She now has a daughter and she says will remain in Nigina until her ten month old baby finishes school.

anne@fdcuganda.org
Posted by Anne at 9:11 PM No comments: